Plant a tree in memory of Genelle
An environmentally-friendly option 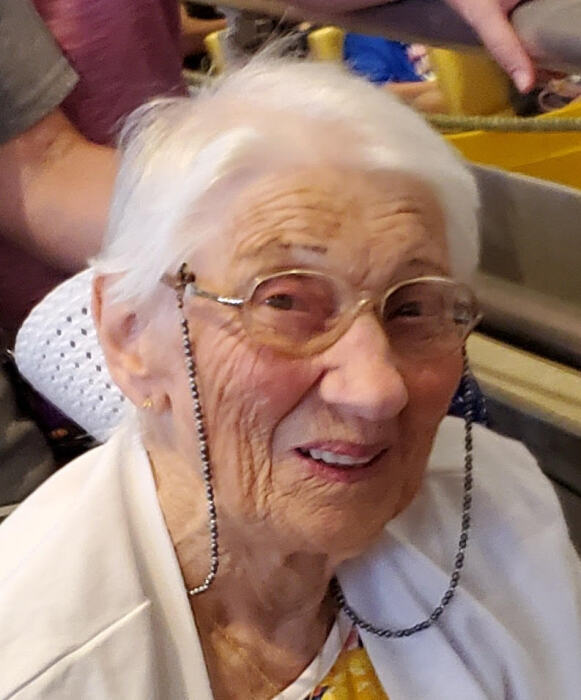 A native of Anson County, she was the daughter of the late Walter and Marybelle Tucker. She grew up in a farming community and attended Deep Creek School. In the fall of 1945, she entered Elon College and graduated with an A.B. degree in 1948. Genelle was married for 65 years to the late Robert J (Bob) Graham (2013), her college sweetheart, and they made their home in Haw River and Graham.

She was a member of St Andrew’s Episcopal Church in Haw River, where she served in many capacities over the years.

Mrs. Graham was also an active member of the Perceptor Epsilon chapter of her sorority, Beta Sigma Phi.

Mrs. Graham enjoyed traveling and spending time with her family, as well as mowing great expanses of lawn on her trusty riding mower. She traveled extensively around the country visiting relatives and particularly enjoyed her trips to Disney theme parks including a cruise.  In her younger retirement life, in addition to being active with her sorority, she delivered Meals on Wheels and served as the precinct chairperson for elections in Haw River.

Because of current travel restrictions, a memorial service will be held at a later date. In lieu of flowers, donations may be made to St Andrews Episcopal Church, P.O. Box 849, Haw River, NC 27258 or Alamance Community College Foundation, P.O. Box 8000, Graham NC, 27253-8000.

Plant a tree in memory of Genelle by clicking here.
To send flowers to Genelle's family, please visit our floral store.

A service summary is not available

Plant a tree in memory of Genelle
An environmentally-friendly option

Plant a tree in memory of Genelle

2 trees planted in memory of Genelle

May this tree grow strong and proud to honor the memory of this extraordinary woman.
Jim Ragona

A Memorial Tree was ordered in memory of Genelle Tucker Graham by Jim Ragona .  Plant a Tree

So sorry to hear of Mrs. Graham’s passing. I worked with her at Broadview Middle School over 50 years ago and had the pleasure of teaching two of her sons at Cummings High School. She was a very sweet lady and helped me very much during my first year of teaching, for which I shall always be grateful.

A Memorial Tree was planted for Genelle Tucker Graham

Plant a tree in memory of Genelle