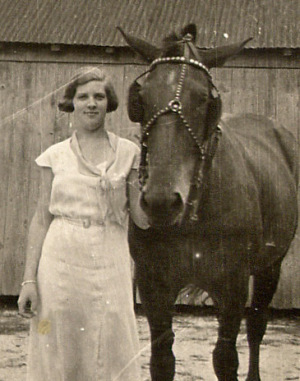 After 101 years of a rewarding life, Iva G. Freshwater died July 23, 2020 around 1:45PM at the Compass Healthcare & Rehab of Hawfields.  She was the daughter of Albert Sturr Gaunt, Sr. and Catharine Amon (Reeve) Gaunt, both deceased.  She was born in Bridgeton, NJ, on December 1, 1918 and outlived her two siblings, Albert Sturr Gaunt, Jr. and Stella May (Gaunt) Wentzell.  She had two children with her first husband, Rowland Ware Dilks, who died in March 1939.  These were Kenneth R. Dilks and Robert Warren Dilks (recently deceased on May 19, 2020).  Just after the second World War she married Edward Kerr Freshwater on March 15, 1947 and followed him to North Carolina.  There she had three children: Susan Elaine (Freshwater) Kernodle, Ruth Ann Freshwater, and Edward Albert Freshwater.  Iva is survived by eight grandchildren, seven great grandchildren, and three great great grandchildren.

Iva was an integral part of Hawfields Presbyterian Church where she became a leader in many of the church’s functions.  For this, she was honored many times.  Iva ran annual Freshwater Reunions there requiring that once lunch was served, that everyone visit her booth to update the family genealogy records.  As she got older, she was the record keeper of the Hawfields’ older members, listing their dates of birth and death.  She became the oldest active member of the church until she was no longer able to attend.

Being born to a farmer, she learned about a hard day’s work at an early age.  In her early adult life, she worked for Reading Railroad until moving to North Carolina with her two young boys.  There she worked for Melville Dairy in Burlington and then finished her career working in the Sears Roebuck catalog sales department.

Iva was one who served and loved her friends and family.  Those who knew her appreciated her unbounded care.  She was lovingly nicknamed “the Energizer Bunny” as she was always doing or helping.  One trait of Iva was that she loved organizing details and taking care of the odd task.  In fact, she was still paying her bills late last year.

She will be laid to rest in Hawfields Presbyterian Church cemetery beside Kerr Freshwater on Tuesday, July 28th, 2020.

To send flowers to the family or plant a tree in memory of Iva (Gaunt) Freshwater, please visit our floral store.

You can still show your support by sending flowers directly to the family, or by planting a memorial tree in the memory of Iva (Gaunt) Freshwater
Share a memory
© 2020 McClure Funeral Service. All Rights Reserved. Funeral Home website by CFS & TA